if there was one fall/winter collection that i couldn’t stand, it was gucci. frida giannini took tom ford for gucci’s elegant decadent 70s and donatella versace’s over the top 80s dynasty, put them in a mixer, threw in red and purple tights and some missoni prints, and somehow celebrities ate it up. 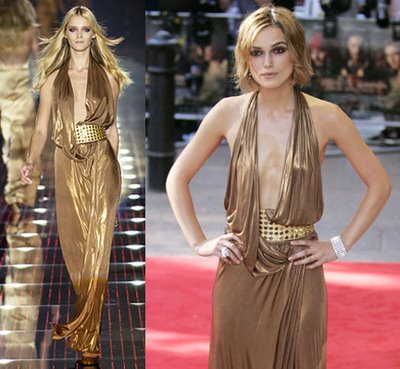 exhibit a: carmen kass and kiera knightley. carmen is a professional, so she manages to make this dress look ok, but on kiera, it looks disatrous, showing off her bony chest. monica did a better job with the shorter version of this dress. the red also works against her skintone. exhibit b: tracee ellis ross is actually working this look, much better than gemma. she has the confidence and stature to pull this off, even though the dress isn’t that flattering. see jessica simpson, in the shorter version. i think the longer version would have worked better on jessica; she’s too short to pull off this length. exhibit c: kate bosworth at the superman premiere. she is also rocking this dress, and its flawless open back. the christian louboutin gwenissima pumps are a great touch. exhibit d: finally, there’s “the dress,” the gold knit weave deep v-neck mini that was first spotted on lindsay lohan. since then, it has appeared on everyone from nicole from the pussycat dolls to jade jagger, with varying degrees of success. thankfully, now that gucci’s f/w sale starts tomorrow and resort merchandise arriving, this collection will die a slow, painful death (or those of you that love it will start picking up pieces at 40% off!)

it’s better over there.