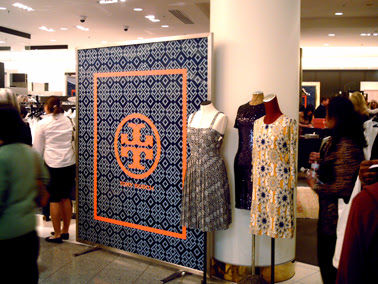 yesterday i attended a trunkshow for the summer 2007 tory burch collection. it was a packed affair, with many of the designer’s fans from all over the bay area showing up to see the entire collection and place orders. tory looked very elegant in a khaki dress, mustard cardigan, kiera wedge and carrying a “T” orange patent and canvas satchel. 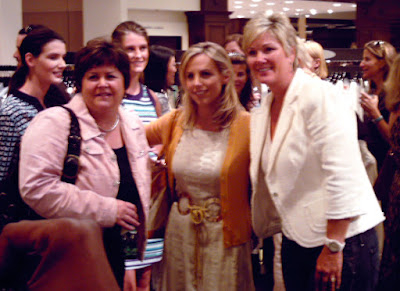 the designer, who hails from philadelphia (also home of yours truly), started out as a fashion editor at harpers bazaar, then worked in pr at ralph lauren, loewe and vera wang. after leaving the workforce to concentrate on raising her three young sons and three step-daughters, she sought something more and started designing her namesake collection in 2004. since then, she’s appeared on oprah, had her signature tunic turn up in a mariah carey video, and her “reva” flat is a must-have, spawning copycats all over the place. 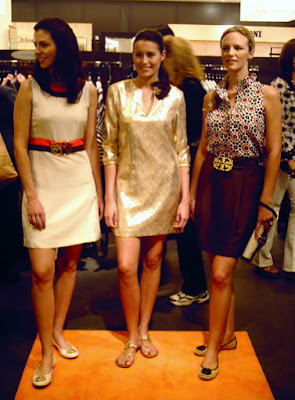 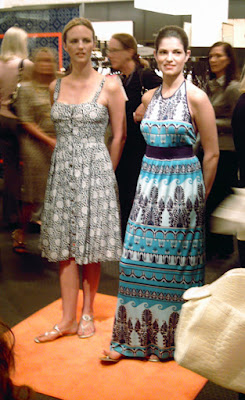 she’s also upped her evening/cocktail wear options, after a sequin t-dress she designed showed up on hilary duff and catherine zeta-jones. for summer, she’s offering a tank and short sleeve version of the dress, plus mediterranean print maxi dresses and gold brocade shifts.

The trunkshow also had her more expanded handbags and shoe lines, included the reva flat, which this season comes in leather, patent leather, python, glittery leather, metallic leather, crochet, lucite, canvas, and leopard and zebra calf hair. my personal favorite is the black patent leather, which has an understated black “T” on top.

i got to chat with tory briefly about home (she wanted to know how often i got back) and her influences (david hicks is a big one). it was a pleasure to meet her and to know that you can reinvent your professional career after taking time out for your family. the collection has just launched a denim line (the jeans were done by habitual before), as well as kids. she’s also focused on her six current stores, with new locations opening in bal harbour and east hampton this spring and houston in 2008. hopefully someday soon, we’ll see a store in san francisco, or in our hometown of philly.

currently coveting: for the host.