don’t be fooled by the rocks that i’ve got. 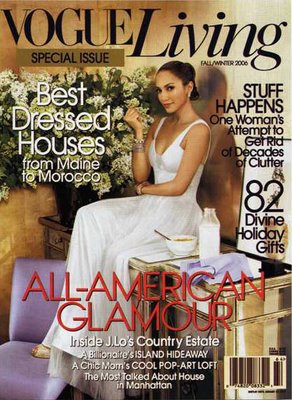 after what seems like an eternity, the debut issue of vogue living will finally hit newsstands on tuesday. and on the cover is jennifer lopez, beatiful and subdued in rochas. according to wwd, the issue will be available on newsstands and will be polybagged with the november vogue to subscribers with an annual household income over $100,000, a net worth of over $1 million, or a home valued at more than $500,000.

la lopez’s editorial is shot at her “country” home she shares with marc anthony in brookville, long island. she says the home blends her more dramatic tastes with anthony’s bohemian style. one of her prized possessions is a white leather and red velvet jewelry box by louis vuitton. she also admits that she never thought of herself as a long island person (having grown up in the bronx), and that she enlisted queer eye for the straight guy interior designer thom filicia to help with the decorating.

amanda brooks, karolina kurkova and aerin lauder are also featured in the issue, along with features on five other ny area homes.

no word yet on the frequency of vogue living; according to wwd, only one more issue is scheduled to come out next year.

the new look: the warm up.