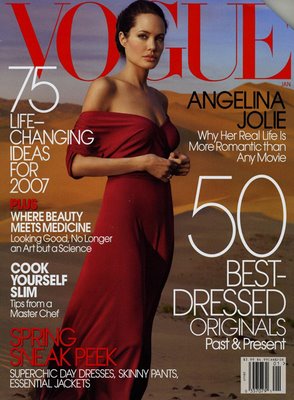 after many reports that she was going to be on the december cover, angelina jolie shows up on january vogue. promoting her movie the good shepard with matt damon, jolie is shot by annie leibovitz. also in the issue is an editorial by steven meisel featuring perennial voguers gemma ward, sasha, caroline trentini, and elise crombez and vogue’s annual 50 best dressed list.

harpers bazaar doubles your pleasure with the holiday stars cameron diaz and kate winslet on the cover. vanity fair also has multiple cover stars with the cast of dreamgirls, including jamie foxx, eddie murphy and beyonce. vanityfair.com has a behind the scenes video of the shoot.

in other mag news, jennifer garner is on us elle, christina aguliera is on us glamour, grey’s anatomy’s katherine heigl is on lucky.

the one thing: love of skulls.